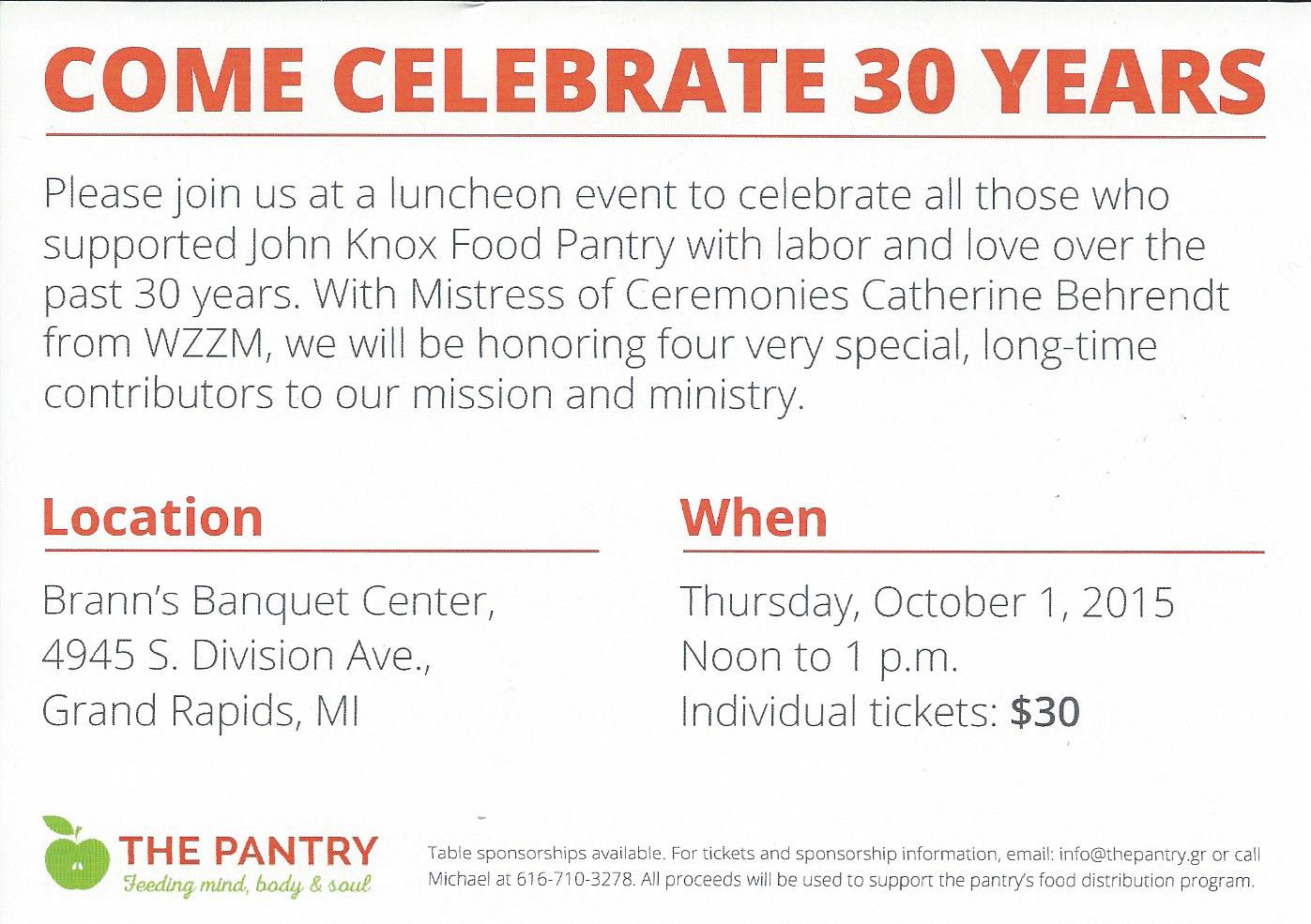 A 30th anniversary only comes around once and we’d like to celebrate with you! We’d like to celebrate you and your relationship with The Pantry at a fundraising event on October 1, 2015. Whether you are a longtime supporter or new to the work we do, we want to have you come out and joing us for lunch. We’ll be honoring a supporting business partner, a few key support churches and a longtime volunteer from John Knox Presbyterian Church.

The Pantry started as a ministry of John Knox in 1985. During interviews with volunteers and members of John Knox Church last year, a few older members remembered that during 1985, 30 years ago, a small food ministry began with funds being set aside and groceries purchased across the street at the grocery store, then delivered from the trunk of a family car by volunteers as needed.That continued for a few years until donations of food and volume of need required a larger closet be cleared for them; this is where the real roots of what we have become took hold.

The Pantry may not even have been on everyone’s radar at John Knox from 1985-1990; it was more of a thoughtful work of mercy of a few congregants. Pictures from this period could not be found, many of those church members from 30 years ago are no longer with us, but by 1990 the pantry had really gotten into full-swing. In that year the pantry joined a collaborative group called the Access Pantry Network. Pictures from that year and the 5 years that followed show huge groups of volunteers from John Knox Church. A smattering of local churches committed funds initially and a part-time director was hired. A decade later, as many as a dozen churches supported the work. On that list were: St. Mary Magdalen, Dutton United, Covenant CRC, Princeton CRC, East Paris CRC, Millbrook CRC, Hillside Community, Kentwood Christian, Crystal Springs, Cornerstone UMC, Holy Cross Episcopal and Kentwood Baptist. Many of those churches still support us today, while others have gone on to provide their own food ministries. A number of volunteers from other churches began to work at the pantry and soon the pantry was truly a Community Food Pantry. The model was very innovative at the time, sharing the work and financial burden with others.

For the next decade and a half, excellent service was provided to tens of thousands of neighbors on a shoestring budget; a true testimony to the faith and faithfulness of this church, the pantry’s leadership, the volunteers and the community. Now, during the 30th anniversary year of the pantry we are embarking on a huge project to move onto the Division/131 Corridor where the poverty in our service area is most concentrated. Being along the new Silver Line Bus Route will make it easier for the hundreds of clients who use The Pantry to get to us and additional space will allow us to do more to help those in need, working to get them out of the situations that brought them to our door in the first place. The Pantry is once again at the forefront of innovation in the fight against hunger and poverty.

At the event we will be honoring John Knox Presbyterian Church for the many years of service to this community through the pantry, it’s pantry and for sharing the vision and planting the seeds of a regional behemoth of service in the name of Jesus. The Pantry will also be honoring, John Knox member Barb Morgan, a major business partner Yanfeng and two major support churches Encounter and Cornerstone. Come and join us if you can! If you are interested in tickets or wish to become a sponsor of the event, contact Michael at info@thepantry.gr or call 616.710.3278 and thank you for 30 wonderful years!

Volunteers: The Heart of The Pantry

We Need Your Help Moving Our Garden!